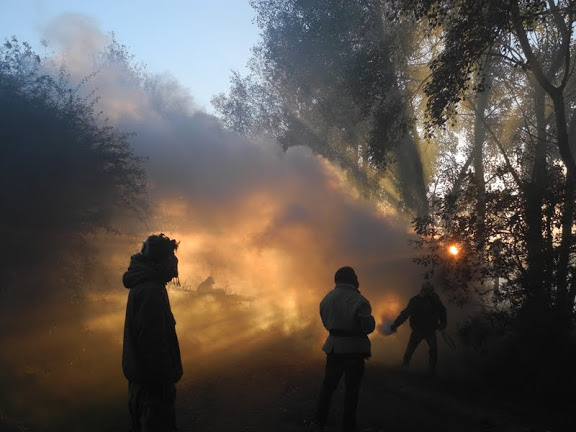 Black February: Message of solidarity from some people of the ZAD (Zone A Défendre) and elsewhere in France, an occupied area against an international airport and metropolisation project.

With pleasure, we heard of the reactions of solidarity against the evictions at Athens in December and January: United States, India, England, Canada, Australia, Japan, Chile… and also the numerous actions and demonstrations throughout Greece.

In split of contexts differences here or elsewhere, the same mechanisms of repression sweep down on all those who struggle against the imposition of what our lives should be. And who wants a liberty which have an other flavour than the sad liberty to survive in their international competition in silence.

We want to express our support to all auto organised spaces which are true breeding grounds for experimentation, where anti-authoritarian ideas and values spread in many sectors.

It’s, among others, within these social, political and cultural places that subversive thoughts develop and spread through the meeting and the innumerable activities which take place: theatre, soli-kitchen, discussions, occupied collective gardens, workshop…And also through relationships which appear during conflictual phases when the State decides to clean up these spaces.

These spaces, around which are organised many struggles for a world without borders nor power, and around which gravitate a lot of people refusing or excluded of their alienating patterns. 1 Eviction! 10 new occupations! 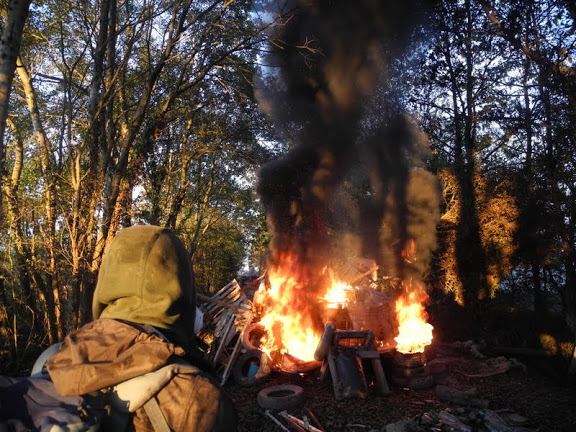 Your rage is sharing here, and it’s with delight we are informed that you don’t let State evict in quiet. Spontaneous demos, attacks and degradations of political offices, reoccupations.. as many events which show to authorities that they won’t be able to exercise their power on our lives and our spaces without hurting some resistances.

Some comrades from the ZAD, made a radio show with comrades from 98FM, we’ve got a particular thought for this radio which has been raided by police. We wish long life to this radio and its future projects.

We’ve got also a particular thought for the comrades from squats evicted, Lelas Karagianni 37 (reoccupied), Skaramaga and Villa Amalias, and the others who’ve showed their determination and assured: we’ll do it again as many times as necessary.

By this occasion, the same comrades had re-assured that ideas and resistance couldn’t be killed by evicting us of these places, but then, therefore, we defend these and reinforce resistance defending their walls. And whatever its resources or numbers, repression will always be strong less than hankering for liberty.

When we attack prisons walls, it’s imprisonment that we’re fighting. When State attacks our squats’ walls it’s the very possibility of an other life, of an other relationship with the way to perceive and live the world that it wants to destroy.

By the defense of these places, in which ones we collectively develop other kinds of free life, it’s not a little fragment of emancipated world that we defend but the very possibility of free life for all! We wish you all courage and determination in the struggle against State and legalised fascism Golden Dawn Party and we send you a strong fire hug from the ZAD in France. This area, despite the big operation of evictions in October and November and the military occupation which takes place from more than 85 days, continue to resist and grow up.

Long live free spaces and anarchy! For a free world for all! International Solidarity! Shoot the power everywhere!

Some enraged people from the ZAD and elsewhere! 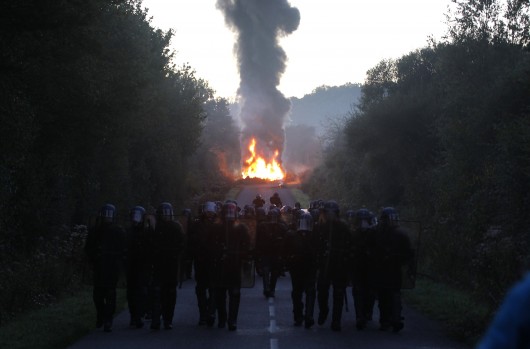 We occupy the area of the airport’s project but our struggle isn’t making for this project particularly but against capitalism system and State which are working together to impose social control infrastructures everywhere. In the context of ‘merchandisation’ of spaces and time, the airport registers into a global process of metropolisation. Also, the company which have to realize and manage the project is Vinci, the international ‘construction/management’ leader. This company which is actively participating to gentrification, makes even business building jails, nuclear power stations, motorways, greenwashing, and other infrastructures.

Near here, there are many struggles against projects like THT (high voltage lines), ‘TGV/TAV’ (fast trains lines), the international airport with the ZAD. And further away, there are NO-TAV struggle in Italia, Hambacher forest in Germany against a coal mine, the struggles against uranium extraction in Nigeria or Australia, the occupation of Combheaven/Bexhil in England or Khimki in Russia against Motorways, in Greece against the gold mine near Halkidiki. These struggles are large and don’t only reflect some local (not in my backyard) or ecologic aspect/character of oppositions to these projects but reflect the expression of refusal of capitalist logic and control and management of our lives through town and country planning too.

Aware that social war is diffuse and present through many forms, our approach doesn’t want to be turned exclusively to one or some projects, but rather as an experimentation form of struggle strategy against State and capital. Partly, taking the projects as a front of this social war, as a part through which one we fight ‘the existing’, as a wheel to sabotage, among others, to destroy the machine. It’s this way that it still us important to share our experiences, our analyses and to increase links and connexions between these struggles and the international anti-authoritarian / anarchists networks in order to reinforce them and to see which perspectives could appear. And also, in order to take out from forms of enclosing in which ones these struggles, spaces could sometimes be maintained (disinformation, mass medias, not much international communications, organisation problems, relationship: rural/urban). 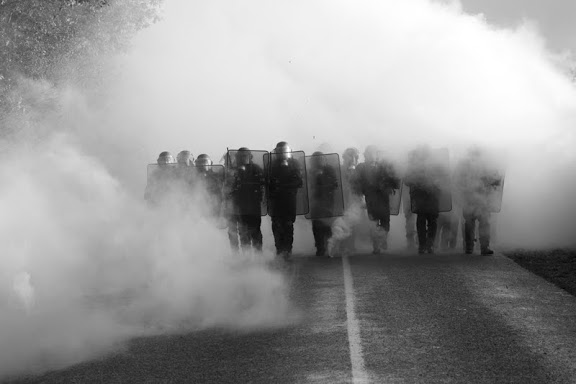 This entry was posted in Black February and tagged France, notre-dames-des-landes, ZAD. Bookmark the permalink.