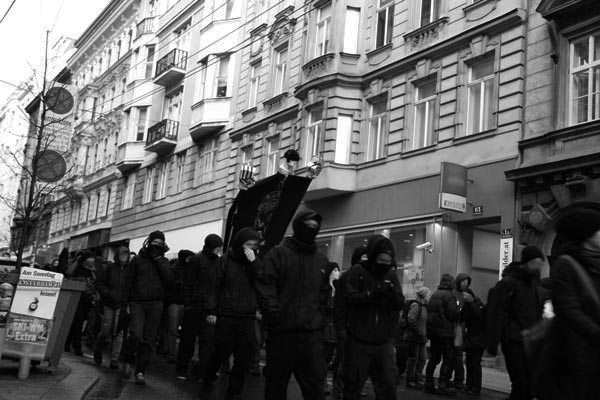 Comrades from Vienna sent us the following text (PDF here):

On Saturday the 2nd of February 2013, a demonstration for the defense and expansion of liberated spaces worldwide took place in Vienna. It was the first day of the transnational campaign for a black February, a day when demonstrations and actions for similar causes happened in several cities around the world.

The demonstration was loud and lively. The route passed the offices of the owners of the Viennese squat Pizzeria Anarchia, the place were the buildings of the Epizentrum used to be (a big occupation in October/November 2011, the buildings were demolished just days after the eviction), the building of the green party (who is in the city government since a few years), the Ammerlinghaus (one of the oldest projects in Vienna that were won by occupation) the Votiv church that is occupied by protesting refugees since several weeks, and ended at the office of the company owning the building of the K.v.U. project in Berlin, Germany. There were chants all the time, many flyers passed out, and verbal inputs at all the important spots that were passed.

Apart from the situation in Berlin and Vienna, transnational solidarity was an important topic of the demonstration. It was initiated by people from Berlin, mostly by supporters of the project K.v.U, the network “Wir bleiben alle!” and the North-East Antifa. The K.v.U. is a project that dates back to the ending times of the East-German GDR and has been a place for antagonistic (youth-)culture and antifascism in Berlin ever since. Now it is threatened with eviction, because the investor company “Immowert”, which has its seat in Vienna, bought the buildings that are home to the K.v.U. and wants them to move out immediately. This already brought K.v.U. supporters to Vienna before, and connections were made among others with the collective of Pizzeria Anarchia. The idea to make a demonstration together has been around for a while, and the rather small movement in Vienna could definitely make use of some support from other cities.

In Vienna, the demo was also mobilized for and supported by the Platz-da!? Campaign, the Pankahyttn and the Autonome Antifa Wien. The Pizzeria Anarchia is also threatened with eviction. The old house with a pizzeria in the ground floor has been a brutal example of the methods real estate investors use to make a maximum profit: People with older and rather cheap rental contracts are being driven out of their homes with pressure and terror, to renovate the whole house and later sell each apartment individually, usually to people of a totally different income range than the people living there before.

The company that owns the house of Pizzeria Anarchia in Muehlfeldgasse 12, Castella GmbH, has a special business model in this process: They buy old houses with just a few tenants left, people that the previous owners didn’t manage to remove, because older rent contracts are usually unlimited in time and the rents often much lower than the flats you can find nowadays. By legal means, it’s almost impossible to get people out of flats like that. So, the prices of houses with a few people renting on an old contract are comparably low. If someone manages to get the people out anyways, possible profits are very high.

Castella GmbH is specialized on this kind of houses, and their creativity to terrorize people until they move out seems endless – stinking chemicals or oil poured out in the stairways, constantly broken front doors to produce a feeling of lack of safety, missing windows or gas supply turned off in the middle of the winter, people with dogs aggressively knocking at the doors late at night telling people to move out, neglect of necessary repairs and cleaning, usually groundless but still scary legal threats against tenants…

At first, the owners of the house thought the people of Pizzeria Anarchia could be useful to their goal of driving out the people still living there with old contracts, so they allowed them for the first half year to stay in the Pizzeria and some of the empty flats for free. But of course the people from the Pizzeria collective never wanted to play that role, and started friendly relations with the older tenants from the beginning. They are people who insisted on staying there even though the previous owner had managed to get empty thirteen flats in a short time, and despite the terror that started since Castella GmbH owned the house.

After some time, the Pizzeria turned into a lively meeting place not only for the people living in the house, but also for people of the neighbourhood and the antagonistic movement in Vienna. Every Sunday, pizza is made for everybody with the principle of free donation, on Tuesday films are being shown, there is an info shop with a small library and a free shop were everybody can bring and take what they need.

Towards the end of the “legal” time, last June, a campaign against the owners was launched, exposing their methods of throwing people out of their homes for profit. The topic was picked up by much of mainstream media, and the fact that the people of Pizzeria Anarchia, usually displayed as “punks”, bound up with the old tenants against the brutal owners was a much-wondered-at curiosity. Now it was clear that the owners had made a mistake to let the Pizzeria people in, and that they were actually the biggest obstacle to their success. It is clear that they will not get the tenants out of the house as long as the Pizzeria collective is there, too. And even the eviction cases against people in other houses owned by the company were dropped, at least for a while.

On the 2nd of August 2012, the owners tried to evict the Pizzeria and the flats used by the collective, with the help of about twelve construction workers, two private detectives and a locksmith. They tried to also get the support of the police, but failed to agitate them to directly participate in the eviction, even though they ignored all crossings of legal boundaries by the owners and cooperated with them to some degree. But people were mobilized to support the house, and were able to defend it. After more than twelve hours, in the middle of the night, the bosses of Castella GmbH and their gang gave up and withdrew.

Since then, there is a case in the district court to evict the Pizzeria Anarchia collective in “the legal way”, and now it is practically over, even though the verdict is not spoken yet. But it is clear that the court will order to execute the “right” of the owners eventually. So, probably within the next few months, the State will try to evict the house and return it to the hands of Castella GmbH. Lots of support will be needed to prevent this from happening.

Solidarity across and against all borders!
For the defense and expansion of liberated spaces!
Fascists and cops out of our neighbourhoods!

This entry was posted in Black February, Direct Action and tagged Austria, Vienna. Bookmark the permalink.

2 Responses to [EN/DE] Vienna: Reportback from the demonstration for liberated spaces (February 2nd)